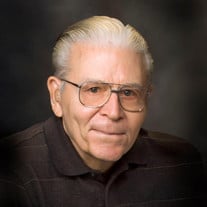 E. Dean Browning Earl Dean Browning, age 95, of Godfrey, Illinois, passed away at home in the early morning hours of Monday, February 22, 2021. Dean was born January 21, 1926, in Annawan, Illinois, to Earl Franklin and Velma Lucille (Moon) Browning. A star basketball player, he graduated from Annawan High School in 1944. Following high school, Dean served his country from 1944 to 1946 in the United States Army rising to the rank of Technical Sergeant (Platoon Leader) in the Anti-tank Company 35th Infantry Regiment 25th Division, Tropic Lightning. Dean was awarded the Bronze Star for gallantry for serving 165 consecutive days in frontline combat service including the invasion of Luzon, the taking of the Balete Pass and the capture of Santa Fe. He was also awarded the Asiatic-Pacific Campaign Medal, World War II Victory Medal, Army of Occupation Medal, Good Conduct Medal and the Philippine Liberation Ribbon. He was among the first Occupation Troops in Japan. After service, he followed his high school sweetheart, Ardythe Machesney to Western Illinois University where he earned a Bachelor of Science in Education with a major in Industrial Education in 1951. Immediately following graduation, Dean and Ardythe married June 23, 1951 at the Fairview United Bretheren Church in Annawan. Seeking employment as married teachers was challenging in the early 1950s because school districts would not hire both husband and wife. However, following a special board meeting, Dean and Ardythe were approved and began their teaching careers in Alton, Illinois. They were the first couple to teach in the same building and the first couple to be central office administrators. During his tenure in the Alton School District, Dean taught all areas of industrial education classes before earning his Masters of Education in Vocational Education from the University of Illinois and becoming Director of Adult Education. As Director he designed Manpower, Apprenticeship and General Education Development Programs, some of which were adopted worldwide. While serving as President of the Vocational Administrators Association, he received his Advanced Certificate of Specialist with work in Guidance and Counseling from Southern Illinois University-Edwardsville. In 1968 he became the Administrative Assistant for Vocational Education and oversaw the grant writing, design, specification and construction of the J. B. Johnson Career Development Center which was, at the time, the second largest vocational school in Illinois. Dean was awarded the Illinois State Board of Education Outstanding Vocational Education Administrator of the Year and was known throughout the Midwest as “Mr. Vocational Education”. Dedicating his life to education, Dean believed that every student could be successful and make a significant contribution to society when they received guidance and training that supported their skills and passion. Having grown up poor, during The Great Depression, he never wanted to see a student go without necessary equipment or supplies that would hinder their education. Many students were the recipients of his anonymous generosity as he and Ardythe purchased, uniforms, shoes and other supplies for students in the vocational programs. Retiring in 1988, after 37 years in the Alton School District, Dean was an active participant and frequent medal winner in the Senior Olympics, and enjoyed playing Saturday morning basketball well into his 80s. He also enjoyed wood working and made toys for many area children. Dean knew how to fix anything and his garage became the neighborhood spot for help and instruction with bicycle, toy and car repair and other assorted life lessons. Nominated by his former students, he was honored with a place in the Alton High School Wall of Fame. He was recently honored on his 95th birthday with a drive by parade of local first responders and Godfrey Mayor, Mike McCormick. It was truly a moment of great joy and pride for him. Preceding him in death were his parents, infant sister, Esther Irene; brother, Delmar Boyd Browning; sister-in-law, Ruth Browning; mother-in-law, Pearl Machesney; father-in-law, James Machesney; brother-in-law, Blaine Bonynge; and close friend and foxhole buddy Gene Bennett. He is survived by his wife of nearly 70 years, Ardythe; their daughter, Lexa Browning-Needham and her husband, James E. Needham of Alton; grandchildren Rachael (Cameron) Williams of Huntsville, Alabama; James A. (Shannon Ryckman) Needham of Montrose, Colorado and Jonathan (Kara) Needham of St. Peters, Missouri; great-grandchildren Kate, Cam and Jack Williams, Hank, Ira, and Dean Needham; sister-in-law Carol Bonynge; niece Susie Browning and nephew Don Browning. The family wishes to thank Dean’s many professional and compassionate caregivers for their excellent and life sustaining care, including Missy from the Jersey County Health Department and the staff from Unity Hospice with special thanks to his nurse, Sarah. Graveside services and burial with full military rites will be held at the Annawan Community Cemetery on Friday, February 26, 2021 at 1:00 pm. For the health and safety of all attendees, masks are required. In lieu of flowers, memorial contributions may be made to E. Dean Browning Memorial Vocational Scholarship. Gent Funeral Home is in charge of arrangements. Online guestbook may be found at www.gentfuneralhome.com.

The family of Earl Dean Browning created this Life Tributes page to make it easy to share your memories.

Send flowers to the Browning family.