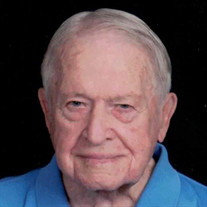 Dateline: Godfrey Donald E. “Bodie” Huber, age 95, passed away on March 5, 2022 in his home surrounded by loved ones. Bodie was born on December 31, 1926 in Alton, IL to George and Mildred (Maher) Huber. He attended SS Peter and Paul Catholic grade school and graduated from Marquette Catholic High School in 1944. Bodie then served in the U.S. Army at the end of World War II. On Valentine’s Day, February 14, 1953, he married Sarah M. Davey. They were married for 69 years. Bodie always claimed he chose that date so he would not forget their anniversary, and he never did. Bodie worked at Standard Oil Refinery and then Amoco for 41 years. Heeding a call to public service, he served as the Alderman for the 3rd Ward on the Alton City Council for 16 years. He later served as the Alton Township Supervisor for 9 years before retiring in 1993. Bodie was always known for his dedication to community service, which began in the early 1960’s when he helped nurture the Little League baseball program. He was a volunteer football coach at St. Mary’s for 10 years and finished with several undefeated seasons. His passion for volunteer service continued with Amocare (Amoco Foundation), Crisis Food Center, St. Anthony’s Hospital and St. Joseph’s Cemetery. Bodie served on the board of several community service organizations including the United Way, Pride and Alton KC Quarterback Club, where he was known for his colorful speeches. He helped plan and organize multiple blood drives for the American Red Cross and helped with the March of Dimes Walk Across America. Bodie was a lifetime member of the East End Improvement Organization and participated in their annual bell ringing for the Salvation Army, Bucket Brigade, Memorial Day Parade, and the Halloween Parade where he served as Parade Marshall in 1994. Bodie spent his retirement enjoying his family. Nothing made him prouder than taking an active, loving role in the lives of his four grandchildren, and you could always count on homemade chocolate chip cookies whenever you visited his house. He was an avid fan of girl’s high school softball and the LCCC women’s soccer team. Bodie always had a story to tell and loved to be around people. He never met a stranger, and he had the uncanny ability to talk to anyone and figure out within a short period of time how he knew them or someone that they were related to. In addition to his wife, he is survived by four children: Donald J. Huber, Georgia (Randy) Fox, Susan M. Goodman, and Joseph (Dan) Huber, along with a daughter-in-law, Lisa S. Huber. His grandchildren: Michael (Margaret Rogers) Huber, John (Vicki Rodriquez) Huber, Andrew (Ann) Fox, and Rachel (Kyle) Williams. His great-grandchildren: Cooper and Tucker Williams, Eugenia and Silas Huber and John Bodie Fox. Bodie is also survived by numerous nieces and nephews along with life-long friend Ed Rothe. Along with his parents, he is preceded in death by his father and mother-in-law, Francis and Sarah (O’Toole) Davey, a brother, Harold Huber and two sisters, Veronica Miller and Mary Alice Deckard. Brothers-in-law, John Deckard, Francis (Pete) Davey, and Charles (Danny) Davey. Sisters-in-law, Betty Huber, Martha Davey, Maria Davey and Mary Catherine Henson, and a son-in-law, Steve D. Goodman. Visitation will be from 10:00 a.m. until time of Mass of Christian burial at 12:00 noon Saturday, March 12, 2022 at St. Mary’s Catholic Church in Alton. Burial will be at St. Joseph’s Cemetery in Alton. Memorials may be made to the St. Mary’s School Sports Program, 536 E. 3rd Street, Alton, IL 62002. Gent Funeral Home in Alton is in charge of arrangements. Online guestbook and information may be found at www.gentfuneralhome.com

The family of Donald "Bodie" Huber created this Life Tributes page to make it easy to share your memories.

Send flowers to the Huber family.