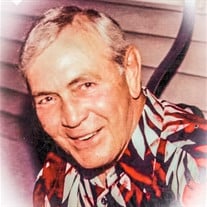 Dateline: Alton Donald E. Hampton, 75, died at 8:44 a.m. Tuesday, November 30, 2021 at St. Mary’s Hospital in St. Louis, MO. Born March 24, 1946 in Alton, he was the son of Harold and Lorraine (Wethington) Hampton. Mr. Hampton served in the U.S. Air Force as a Tech Sgt. from 1965-1968 and was a member of SS. Peter & Paul Catholic Church in Alton. He retired as an electrician for Fred Weber Rock Quarry. On May 19, 1967 he married the former Ellen M. Lamparter at Cannon Air Force Base in Clovis, New Mexico. She survives. Also, surviving are two daughters, Dawn McDonald (Robert) of Jerseyville and Shannon Orban (Bryan) of Medora, two sons, Eric Hampton (Cynthia) of Jerseyville and Zane Hampton of Alton, 11 grandchildren and six great grandchildren. He is also survived by three brothers, John Hampton, Greg Hampton, and Bobby Hinthorne, and a sister, Joyce Curry. Besides his parents, he was preceded in death by a brother, Wayne “Cork” Hampton and three sisters, Linda Cerutti, Marilyn Stemm, and Karen Hinthorne. Visitation will be from 4:00-8:00 p.m. Thursday, December 2, 2021 at Gent Funeral Home in Alton. A Mass of Christian burial will be at 10:00 a.m. Friday, December 3, 2021 at SS. Peter & Paul Catholic Church in Alton. Father Jeff Holtman will officiate. Burial will be at St. Patrick’s Cemetery in Godfrey with full military honors. Memorials may be made to SS. Peter & Paul Catholic Church. Online guestbook and information may be found at www.gentfuneralhome.com

The family of Donald E. Hampton created this Life Tributes page to make it easy to share your memories.

Send flowers to the Hampton family.