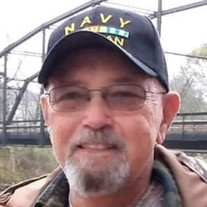 Donald Allen Dossett, 70, died at 6:19 p.m. Monday, February 8, 2021 at Barnes Jewish Hospital. Born April 29, 1950 in Litchfield, he was the son of Elvis G. and Ruth (Battershell) Dossett. Mr. Dossett served in the U.S. Navy and retired as a computer operator for Blue Cross Blue Shield. He was a member of the Blue Ridge Express Band. On July 18, 2004 he married the former Jeanette Raque in Brighton. She survives. Also surviving are three daughters, Dawn Norris (James) of Joliet, GA, Ruth Dossett of Hawkinsville, GA, and Catrina Zimmer of Dobbins, CA, two sons, Jeff Dossett (Jodi) of Litchfield, and Joseph Zimmer (Michelle) of Dobbins, CA, 11 grandchildren, Matthew, Warren, Austin, Charleigh, Clint, Paige, Kerstin, Elvis, Justin, Ava, and Caleb. He is also survived by a brother, Lowell Dossett (Barb) of Shipman, IL, and two sisters, Melody Dossett of Grafton, IL, and Patricia Toolen (Tim) of St. Peters, MO. Along with his parents, he was preceded in death by a son, Andy Rosentreter, and a granddaughter, Samantha Ruth. A celebration of life service will be held at a later date. Memorials may be made to APA in St. Louis, MO. Gent Funeral Home in Alton is in charge of arrangements. Online guestbook and information may be found at www.gentfuneralhome.com

The family of Donald Allen Dossett created this Life Tributes page to make it easy to share your memories.

Send flowers to the Dossett family.