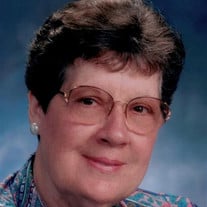 Dateline: Godfrey Dolores B. Wagener, 92, died at 11:34 a.m. Thursday, August 6, 2020 at integrity of Godfrey. Born June 13, 1928 in Kane, IL, she was the daughter of Robert Elwood and Mabel (Unger) Ambrose. She attended school in Carrollton, IL before moving to Alton. She married Lee Witcher Sr., with whom she had three children. He passed away in 1978. She then married Howard “Sam” Little who passed away in 1991. Dolores married Robert “Gene” Wagener in 2000. He passed away in 2011. Dolores is survived by her sister, Linda Ambrose Witcher, her children, Lee Witcher Jr. (Carole) of Monroe, NC, Daniel Witcher (Mardell) of Alton, and Kimberly Witcher Scroggins of Godfrey, step children, Howard Michael Little of Columbia, MO, Tom Little of Alton, Jim Little (Judy) of Alton, Judy Wade of Carrollton, IL, and Karen Wagener (MB) of Carrollton, IL. Also surviving are grandchildren, Grant Dawson Witcher, Craig Soong-Wilson (Calvin), Ryan Hirsch (Amanda), Alison Witcher, Ashley Witcher, Elizabeth Scroggins and Emma Scroggins, four great grandchildren and many nieces and nephews. She enjoyed keeping house and traveling. Mrs. Wagener worked at GNC at Alton Square. She attended St. Patrick’s Church in Alton and Clifton Baptist Church in Godfrey and was a member of Rebekah’s and Navy Mothers. She was a Girl Scout and Boy Scout leader and volunteered at Beverly Farm. Along with her parents and husbands, she was preceded in death by two brothers, Charles and Paul Ambrose and a sister, Hazel Barber. Graveside services will be at 1:00 p.m. Tuesday, August 11, 2020 at Rose Lawn Memory Gardens in Bethalto. Reverend Steve Rice will officiate. Memorials may be made to Beverly Farm. Gent Funeral Home in Alton is in charge of arrangements. Online guestbook and information may be found at www.gentfuneralhome.com

Dateline: Godfrey Dolores B. Wagener, 92, died at 11:34 a.m. Thursday, August 6, 2020 at integrity of Godfrey. Born June 13, 1928 in Kane, IL, she was the daughter of Robert Elwood and Mabel (Unger) Ambrose. She attended school in Carrollton,... View Obituary & Service Information

The family of Dolores B. Wagener created this Life Tributes page to make it easy to share your memories.

Send flowers to the Wagener family.