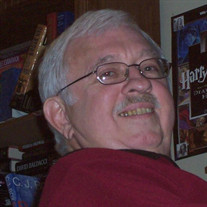 Dateline: Godfrey, Illinois David Lee Blankenship, 78, died at 12:30 pm on Thursday, February 17, 2022 at Ray and Kay Eckstein Hospice Care Center in Paducah, Kentucky. He was born on September 14, 1943 in Alton, the son of Donald (adoptive father) and Betty (Wood) Blankenship. Also, the son of Charles Kohlbaker. David graduated from East Alton-Wood River High School. After graduating high school, he entered the military. He served with the United States Air Force for twelve years. He started computer programming while serving. He was honorably discharged from the United States Air Force. He then graduated from Lewis & Clark Community College with his associate’s degree in information technology. He worked for Healthlink Inc. before retiring. Family members, friends, and/or coworkers would constantly seek his assistance and/or knowledge with computer issues. After retiring, he enjoyed fishing, model railroading, golfing, reading, gardening, and completing sudokus. David was a member of Saint Mary’s Church. On August 1, 1964 in Wood River, IL he married Carol (Laird) Blankenship who survives. They have been married fifty-seven years. Also, surviving are one son, Mark Blankenship, and one daughter, Amy Blankenship. Surviving are seven half brothers and sisters. He was preceded in death by his parents, an infant daughter, Mary Blankenship, and an infant son, Michael Blankenship. A memorial service will be held at a later date. Memorials may be made to the American Diabetes Association, The American Heart Association, Alzheimer’s Association, Vietnam Veterans of America, or Masses. Gent Funeral Home is in charge of arrangements. Additional information and online guest book may be found at www.gentfuneralhome.com.

The family of David Lee Blankenship created this Life Tributes page to make it easy to share your memories.

Send flowers to the Blankenship family.