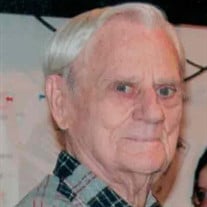 Cletus W. “Squeak” Hayes Jr., 96, died at 7:30 a.m. Saturday, February 27, 2021 at Alton Memorial Hospital. Born August 15, 1924 in Kane, IL, he was the son of Cletus W. Hayes Sr. and Edna (Witt) Hayes. Mr. Hayes was a WWII Army Airborne Veteran and was a life member of the VFW Post 1308. He was also a member of Lodge 951 of the Moose in Alton. He retired as a lab inspector for the Olin Corporation after 45 years of service. On July 31, 1948 he married the former Betty Lu Johnston in Alton. She preceded him in death on January 24, 2015. Surviving are two sons, William “Bill” Hayes of Eureka, MO, and Patrick “Pat” Hayes of Alton, two grandchildren, Erin (Matt) Grieshaber of St. Charles, MO, and Corey (Jennifer) Hayes of St. Charles, MO, great grandchildren, Luke and Beck Grieshaber, Harper Hayes, and Connor Hayes. Also surviving is a brother, David (Barb) Hayes of Alton, and two sisters, Flo Duncan of Alton and Linda (Mike) Wense of Alton. Along with his parents and wife, he was preceded in death by five sisters, Kate Cole, Dorothy May, Agnes Naylor, Sarah McNab, and Rose Luecht. Visitation will be from 9:00 a.m. until time of funeral at 11:00 a.m. Thursday, March 4, 2021 at Gent Funeral Home in Alton. Reverend Bill Pyatt will officiate. Burial will be at Valhalla Memorial Park in Godfrey with full military honors. Memorials may be made to the VFW Post 1308. Online guestbook and information may be found at www.gentfuneralhome.com

The family of Cletus "Squeak" Hayes Jr. created this Life Tributes page to make it easy to share your memories.

Send flowers to the Hayes family.