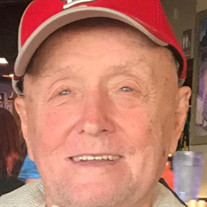 Dateline: Alton Clarence “Clancy” E. Stewart passed peacefully Wednesday, April 8, 2020 at his home in Alton. Clarence was born March 7, 1935 in Hartford, IL to Louis and Emma (Laird) Stewart. He married Jearoldine McGuire. She preceded him in death. Clarence and Carol (Sumpter) Stewart were married on October 15, 1971. Clarence was a member of the North Alton Baptist Church where he served as a Deacon and Trustee. He enjoyed maintaining the inside and outside of the building with his church family. Clancy began his career with Owens-Illinois in Alton in March of 1952 as a floor-boy. When the plant closed down, he and the family transferred to Toledo, Ohio. After fourteen years of extensive traveling throughout the states and many countries for the company, he and the family moved back to Alton. In March 1997, Clancy retired as a Senior Engineer with 45 years of dedicated service to Owens-Illinois. After retiring, Clancy enjoyed working at Lowes in Alton for several years. In earlier years, Clancy was on a roller derby league and he and his brothers raced cars. He played softball on leagues for O-I and Alton. Clancy especially loved bowling. Sometimes he bowled in 5 or 6 leagues a week. He and Carol enjoyed going on bowling trips with the teams. He served on the ABC Board and was a member of the 700 Club. Clancy was an avid Cardinal baseball fan. In earlier years, the family enjoyed following them to spring training in Florida and spending time with the players. Along with his wife Carol of 48 years, he is survived by two daughters, Tiffany Breden and Tammy Conreux both of Alton, one son, Michael Eubanks of Brighton, granddaughter, Taya Breden of Fort Myers, FL, grandsons, Chris and Kaden Conreux of Alton and Mike Eubanks of Godfrey. Brothers-in-law, John (Jackie) Sumpter of Alton and Tom Sumpter of East Alton and sisters-in-law, Vicki Thoe and Sue Sumpter of Godfrey and Paulette Sumpter of East Alton. Many cousins, nieces, nephews and great nieces and nephews. He was preceded in death by his parents, six brothers, one sister, father and mother-in-law, James and Josephine “Jitter” Sumpter, and his brother-in-law, Jim “Jimbo” Sumpter. Due to the COVID-19 guidelines regarding public events, a drive thru visitation will be from 10:00 a.m. until 11:00 a.m. Saturday, April 11, 2020 at Gent Funeral Home in Alton. Please enter the funeral home parking lot via Rozier Street and proceed under the new carport. We are asking that no one stop or leave their vehicle to comply with our present social distancing order. Private graveside services will be held at St. Joseph’s Cemetery. Pastor Sonny Renken will officiate. Memorials may be made to the North Alton Baptist Church Online guestbook and information may be found at www.gentfuneralhome.com

The family of Clarence "Clancy" Stewart created this Life Tributes page to make it easy to share your memories.

Send flowers to the Stewart family.