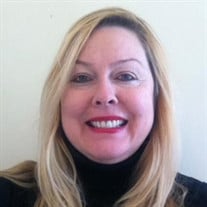 Dateline: Glendale, CA Catherine L. (Whitlock) Herzon, 55, passed away at 10:54 a.m. Saturday, October 31, 2020 at her residence in Glendale, California. Born May 8, 1965 in Alton, IL she was the daughter of Eugene and Arnetta (Kee) Whitlock. After graduation from Alton High School, Cathy received a B.S. in Business Administration and Management from Kansas State University, an M.S. in Human-Computer Interaction from DePaul University, and a Master of Management in Library and Information Science (M.M.L.I.S.) from the University of Southern California. She was employed as the Regional Librarian for the Smith Library at the LA Campus of West Coast Ultrasound Institute in Los Angeles, CA. She was also employed as a part-time Librarian at the Los Angeles Public Library. A gifted musician and singer, she performed in many jazz, blues, cover, and rock bands in Chicago and Los Angeles. She also performed in many stage/musical productions. Music was her deepest passion. She was a director of Giving Music, non-profit charitable organization in Los Angeles offering healing through live performances and performed with the Pay It Forward Band. She is survived by her father, Eugene Whitlock of Godfrey, IL; a sister and brother-in-law, Cynthia (Steve) Curry of Godfrey; a sister and brother-in-law, Carol (Mike) Pashea of Edwardsville; three nieces, Lauren Youngberg (John Flavan) of St. Charles, MO; Rachel (Jonathan) Pieper of Troy, IL; Sarah Pashea of Edwardsville; and one nephew, Chris Pashea of Edwardsville. She is also survived by her longtime boyfriend and dearest friend, Eric Pelton of Sunland, CA. She leaves behind many other family members, friends, bandmates and co-workers to mourn her loss. Along with her mother, she was also preceded in death by her grandparents, Orville and Imogene Kee, and Wiley and Frances Whitlock, and by her beloved dog, Misfit. Cremation rites have been accorded and private burial will be held at Valhalla Memorial Park at a later date. Memorials may be made to Giving Music. Fly high beautiful songbird. Online guestbook and information may be found at www.gentfuneralhome.com

Dateline: Glendale, CA Catherine L. (Whitlock) Herzon, 55, passed away at 10:54 a.m. Saturday, October 31, 2020 at her residence in Glendale, California. Born May 8, 1965 in Alton, IL she was the daughter of Eugene and Arnetta (Kee) Whitlock.... View Obituary & Service Information

The family of Catherine L. Herzon created this Life Tributes page to make it easy to share your memories.

Send flowers to the Herzon family.