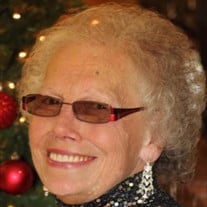 Dateline: Wood River Carol A. Bloodworth, 80 of Wood River died at 6:20 a.m. on Sunday, November 8, 2020 peacefully in her home with her family at her side. She was born on April 29, 1940 in Kampsville, Illinois to the late George & Dorothy... View Obituary & Service Information

The family of Carol Ann Bloodworth created this Life Tributes page to make it easy to share your memories.

Send flowers to the Bloodworth family.