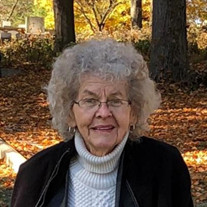 BETHALTO Betty Faye (Danner) Pearson passed away on Thursday, September 3, 2020, at her apartment in the Cedarhurst complex in Bethalto. She passed peacefully, surrounded by her daughter Cindee and her two granddaughters Sara and Samantha, both R.N’s. She was born on February 24, 1927 in LaPlata, Missouri, the daughter of Arthur Danner and Zelma (nee Albright) Danner. She married Elliott Shelton Pearson, July 29, 1950, in Moberly, Missouri. He preceded her in death. Survivors include her sister, Joyce Cox of Waverly, Iowa; one son and daughter-in-law, John and Julie Pearson of Wood River; one daughter, Cindee Hunter of Alton; five grandchildren, Sara (Hunter) Sutton of Alton, Tom Hunter (Amanda) of Bethalto, Samantha Estrada (Jose) of Bethalto, Elliott Andrew Pearson of St. Louis, and Ross Pearson of Wood River; plus Great Grandchildren Taylor, Andrew, and Maicey Hunter; Jose Jr., Jake, and Josh Estrada; and Anna Sutton. A graduate of LaPlata (Mo.) High School in 1945, she was the Valedictorian of her graduating class and excelled in in girls’ basketball. After her children were both enrolled in school, Mrs. Pearson attended the old SIU-Alton campus and later SIU-Edwardsville. She graduated with a B.S. in Education in June 1969, with a certificate to teach French and English. She began her teaching career in the Alton School District in August 1969, as a teacher at East Junior High School, and continued 25 years of teaching in various Alton schools, including North and West Middle Schools, Alton High, finishing her career at East Middle School. She was a resident of Alton for 65 years. Prior to marriage, Mrs. Pearson worked in Quincy, Illinois and later, Moberly, Missouri for International (Brown) Shoe Company. During her childhood in LaPlata, she lived through and survived the infamous “dust bowl” and the Great Depression. She also attended high school during the WW II years, during the era of rationing of gas, sugar, rubber, and other shortages. She was truly a part of the “Greatest Generation,” as Tom Brokaw later coined. Betty was a devoted wife, mother, grandmother, and great grandmother who loved spending countless hours with her family, especially holding and playing with her great-grandchildren in her later years. She also loved to watch her beloved St Louis Cardinals, Rams, and the Fighting Illini games. Elliott and Betty were season ticket holders to the St. Louis Football Cardinal games from 1973–1987 and attended nearly every game. She also loved to play golf, bowl, and travel. Betty played in the “Lady Birdies” golf league at Muni Golf Course as well as bowled in women’s leagues at Bowl Haven. She and Elliott played dozens of golf courses all over the nation, touring the country, playing the links and seeing the sights, with their RV in tow. Right after her retirement as a teacher in 1994, she and her friend, Jan Reid of Alton, journeyed for three weeks to France, living with a French family and immersing themselves in French culture and sightseeing. Betty was a lifelong member of the Christian Church, with most of those years at the First Christian Church in Alton, where she taught Sunday School, supervised the nursery, and was a constant and friendly presence to all in the church. In addition to her parents, she was preceded in death by her husband, Elliott and her brother Donald of Vacaville, California. Visitation will be held on Wednesday, September 9, 2020 at the 1st Christian Church in Alton, from 11:00 a.m. - 1:00 p.m. with the Memorial Service to follow thereafter. In lieu of flowers, memorials are suggested to the 1st Christian Church in Alton. Burial services will be private. Additional information and online guest book may be found at www.gentfuneralhome.com

BETHALTO Betty Faye (Danner) Pearson passed away on Thursday, September 3, 2020, at her apartment in the Cedarhurst complex in Bethalto. She passed peacefully, surrounded by her daughter Cindee and her two granddaughters Sara and Samantha,... View Obituary & Service Information

The family of Betty Faye (Danner) Pearson created this Life Tributes page to make it easy to share your memories.

Send flowers to the Pearson family.