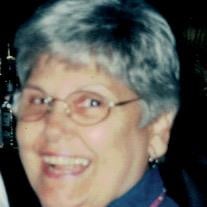 Barbara Ann Molloy, 80, died on the evening of November 10, 2020 at OSF St. Anthony’s Health Center in Alton after a short but courageous battle with COVID. Due to the pandemic, the funeral mass was postponed. Barb was born on January 3, 1940 in Alton to Robert and Genevieve (Arnold) Redd. She attended St. Patrick’s grade school where she met her husband, Michael Molloy, Sr. She graduated from Marquette Catholic High School. She married Mike on November 4,1961 and the two were the parents of four beautiful children. She was a member of St. Mary’s Catholic Church in Alton. Barb dedicated many years to her career as a nursing home administrator. She was a friend to all and never met a stranger. She had an infectious laugh and a smile that could light up any room. She is survived by her daughter, Jennifer Ridings (Stephen) of Alton; two granddaughters, Emily Freeman (Bobby Trnavsky) of St. Louis, MO and Abigail Freeman (Spencer Bosoluke) of Bozeman, MT; a cousin, Rosemary Richey; a sister-in-law, Jan Molloy; brothers-in-law, Richard Renard and Tom Wilson; and many nieces and nephews. She was preceded in death by her husband; infant daughter, Melissa; son Michael James Jr.; parents; mother-in-law, Opal Molloy; father-in-law, Weston Molloy; brother-in-law, Timothy Molloy Sr.; and sisters-in-law, Patricia Wilson and Kay Renard. On June 3rd, 2021, Barb’s oldest daughter, Michelle, passed away suddenly. The two had an inseparable bond and were only able to be apart for seven short months. A joint Mass of Christian burial will be held on Friday, June 18, 2021 at 10:00 a.m. at St. Mary’s Catholic Church in Alton. Burial will be held at Scenic Hill Cemetery in Grafton, IL. In lieu of flowers, memorials may be made to Shriners Hospital for Children in St. Louis. Gent Funeral Home in Alton is in charge of arrangements. Online guestbook and information may be found at www.gentfuneralhome.com

Barbara Ann Molloy, 80, died on the evening of November 10, 2020 at OSF St. Anthony&#8217;s Health Center in Alton after a short but courageous battle with COVID. Due to the pandemic, the funeral mass was postponed. Barb was born on January... View Obituary & Service Information

The family of Barbara Ann Molloy created this Life Tributes page to make it easy to share your memories.

Send flowers to the Molloy family.