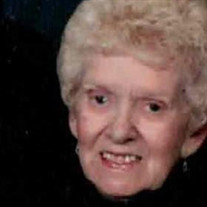 Dateline: Alton, IL Alice Helen (Eales) Wood, 93, died Tuesday, March 23, 2021 in St. Charles, MO. She was born on the family farm north of Godfrey, IL on August 4, 1927. She was the oldest of five children born to the late Elza Terhune Eales and Lelia (Schudel) Eales. Alice attended a one room elementary school north of Godfrey. She graduated from Monticello Preparatory School in 1945 and then entered St. Joseph’s School of Nursing, graduating in 1948. Alice worked as a registered nurse at St. Joseph’s Hospital from 1948 until the hospital closed in 1989. She worked at St. Anthony’s Hospital as a registered nurse from 1989 until 1992 when she accepted a position as a registered nurse with an Obstetrical and Gynecological group in Alton until she retired. Alice married Robert (Bob) Earle Wood on August 20, 1950 at Moro Presbyterian Church in Moro, IL. They loved and raised their three children in a home they built together in Moro. Nursing ranked second in her life after her family. Alice was very proud that all three of her children attained college degrees. Preceding her in death were her parents, one infant sister; Elsie Mae, her husband Bob; brothers Robert and Charles Eales, sister-in-law’s Betty, Jenelle, and Helen Eales, one nephew Mark Eales, and one niece Cathy Kimball. Surviving are her children: James and (Luanne) of Tucson, Arizona, John and (Emily) of Worden, Mary and (Robert Brown) of St. Charles. Four grandchildren: Sarah Johnson (Luke) of Wilmington, NC, Jason (Karen) of Tucson, AZ, Hannah (Clay) Huffman of Grand Junction, CO and Andrew of Bethalto; her brother John Eales of Meadowbrook, great-grandchildren Jack and Ella of Wilmington, NC, Maddie of Bethalto and Barrett and Evelyn from Grand Junction, CO. She is also survived by many nieces and nephews. She will be laid to rest beside her husband in Moro Cemetery in Moro Il. Alice was dearly loved and will be greatly missed by her family and many friends. In lieu of flowers, memorials may be made to SS Peter and Paul Catholic Church in Alton and the Moro Cemetery Association in Moro, IL. Visitation will be from 10:00 a.m. until 10:45 a.m. on Friday, April 9, 2021 at Gent Funeral Home in Alton. A Mass of Christian burial will be at 11:00 a.m. on Friday, April 9, 2021 at SS Peter & Paul Catholic Church in Alton. Father Jeff Holtman will officiate. Burial will be private at Moro Cemetery in Moro, IL. Additional information and online guest book may be found at www.gentfuneralhome.com

The family of Alice Helen Wood created this Life Tributes page to make it easy to share your memories.

Send flowers to the Wood family.