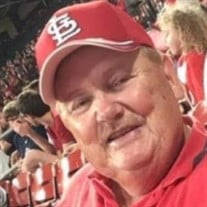 Dateline: Godfrey Alan “Steve” Harmon, 70, died at 3:45 a.m. Monday, August 31, 2020 at his home in Godfrey. Born July 25, 1950 in Litchfield, he was the son of Clarence A. and Amy (Merrill) Harmon. Mr. Harmon began working at Central Wheel Alignment and Brake Service in 1967 and became owner/operator in 1980 until 2007. He then worked for Jet Aviation from 2008-2015. He was a member of the Alton East End Improvement Association and the Optimist Club. On January 18, 1971 he married the former Lauretta Lou Kelly in Alton. She preceded him in death on September 6, 2012. Surviving is a daughter, Kelly Harmon of St. Charles, MO, a son, Craig Harmon (Megan) of Moorestown, NJ, four grand children, Cooper, Morgan, Madison and Mia Harmon, and a sister, Betty Norman of Godfrey. Also surviving are his in-laws, Jerry (Diane) Kelly, Don (Jan) Kelly, Johnny (Kathy) Jones, Johnna (John) Mitchell, Russ Jones (Colleen Miller) and several nieces and nephews and special friends, Mike and Sherry Oettle. Along with his parents and wife, he was preceded in death by a brother, Robert Bryant and a sister-in-law, Laura Gregory. Visitation will be from 5:00 p.m. until time of memorial service at 7:00 p.m. Wednesday, September 2, 2020 at Gent Funeral Home in Alton. Reverend Adrian Das will officiate. Burial will be private at Upper Alton Cemetery. Memorials may be made to the Alton East End Improvement Association. Online guestbook and information may be found at www.gentfuneralhome.com

The family of Alan "Steve" Harmon created this Life Tributes page to make it easy to share your memories.

Send flowers to the Harmon family.